As a refresher, CiderWorld is an international cider fair in Frankfurt, Germany launched in 2008 as Apfelwein International and organised by Michael Stöckl, Apfelwein sommelier. And, an event that can’t be missed!

CiderWorld2019 started very well for me as once I checked in at the hotel, Grandhotel Hessischer Hof, and entered the hotel room I saw a bottle of the Ramborn Original and a welcome note from the organisers of CiderWorld waiting for me. It’s just a small thing but it’s something that immediately puts a smile on your face and makes you feel welcome.

Since I’m based in Berlin, not in Frankfurt, I was not able to participate in the CiderWeek that similarly as last year was held in Frankfurt before the actual CiderWorld began. But still, I would like to briefly tell you about it. Just like last year, there were multiple events happening in different venues in Frankfurt promoting cider culture, and most importantly, educating! Events such as AfterWork CiderParty in Manhattan Bar, where cocktails are served based on Apfelwein; Sidra y Tapas, where participants get to try sidra from Asturias and sagardoa from the Basque Country; Irish Cider Tasting, where various ciders from different Irish counties are poured or Frank Winklers große Probe with local Frankfurt dishes paired with exquisite Apfelwein made by producers from Hesse are great opportunities to introduce many to cider and showcase different cider styles around the world and make people understand that cider is meant for pairing with food. As I am looking up all the events that took place during the cider week, I read that most events were sold out! Great to hear that cider is so popular in Frankfurt!

When I came last year to Daheim im Lorsbacher Tal, where the jury was supposed to sample ciders submitted to the CiderAwards, I was a little bit insecure and a little unconfident as I simply didn’t know anyone of the judges in person. It was my first judging panel and I didn’t know if I perform well. This year was different. As I entered the restaurant I saw many friendly and familiar faces. I’m not only referring to Michael Stöckl, who gave me a very warm welcome but also Frank Winkler, Susanna Forbes, Eduardo Vázquez Coto, Darlene Hayes, Gabe Cook and many, many more. I’m not going to bore you with details of the judging itself as it essentially had the same format as last year. However, we tried a bit fewer samples than last time. My judging panel was supposed to try 22 ciders, which ended up in 24 ciders as one of the judging panels needed more time for sample evaluation as mine.

My observations from the judging are that despite deep knowledge about cider and cider making, not everyone can be a good judge.  If you want to be a judge, you have to be fair and evaluate products by their quality and regionality using a scoring system. Judging is not a matter of personal preferences. One doesn’t have to be a fan of Asturian sidra, Basque country sagardoa or English “West Country” cider but has to evaluate this type of product according to the scoring system. I’m bringing this up as one of the judges on my panel apparently didn’t appreciate Spanish style cider and initially gave a lower score to one of the sampled ciders. Only after explaining that this style typically has a higher level of volatile acid and consulting with an Asturian colleague, finally, the score was changed. I don’t think that any festival has the perfect jury so I’m not blaming anyone but situations like these simply make me angry.

Right after the jury tasting, Susanna, Darlene and Gabe decided to pay Apfelweinkontor a visit so I thought I’ll join them. Apfelweinkontor is an Apfelwein store located in the Sachsenhausen area of Frankfurt. Josef was there to welcome us and give us another round of Apfelweintasting. We tried a couple of German Apfelwein and Apfelschaumweins. The Weihman & Groh Boskoop was my favourite of this round. 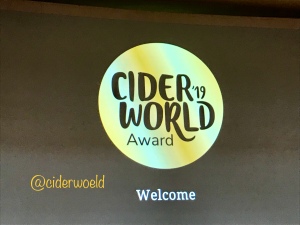 To be honest, I have not the faintest idea of how the organisers managed to calculate all the points and print the certificates for getting either Gold, Silver or Honor in categories, still, sparkling, flavoured & mixed and ice cider. All this basically overnight. It requires a lot of work and organisational skills so bravo for that!

Although the scoring system hasn’t changed since last year, most ciders awarded this time truly deserved the CiderWorldAward. I think that the quality of ciders was simply overall much higher than in the previous year as this year I had significantly fewer reasons to complain. To see the full list of the winners click here. I’ll dedicate a section about my favourite ciders in the later part of this post.

Luxembourg was this year’s guest of honour. And, on Saturday Ramborn as the main Luxembourgish cider maker hosted an incredible cider dinner at a two-star Restaurant Lafleur located in Gesellschaftspalmengarten. Two famous two-Michelin-starred chefs Léa Linster (who happens to come from Luxembourg) and Andreas Krolik were asked by Ramborn to prepare a 7-course menu and pair it with a variety of ciders. And, as the cherry on the cake, Gabe Cook aka the Ciderlogist was invited to introduce cider that was paired with each dish. Doesn’t it already sound like a great event? There were approximately 90 tickets for this exquisite evening priced at 198 Euro and they sold out in just five days of being available. Luckily for me, Ramborn kindly invited me to Cider Gourmet. Thank you for having me!

To summarise it in two words, it was an epic dinner. Each dish was absolutely fabulous and pairing them with cider elevated the dining experience to new heights. Each chef had its own style but both were simply excellent. Most ciders were fantastically paired and complemented these exquisite dishes. There were a few cider pairings that were sensational, incredible, fantastic, just blown me away. I was especially fond of the Speierling from Jens Becker paired with fried artichoke and gourmet mushroom ravioli with artichoke veloute, peas, roasted quinoa and hazelnut-lemon foam. Ice Cider from Brännland paired great with duck foie gras marinated in ice cider with mango jelly and toasted brioche.

And, the Ramborn Bourbon Barrel Aged still cider was absolutely fantastic in combination with saddle and cheeks of Vogelsberger free-range beef with red wine butter, truffle jus, oven-cooked celery, roasted leek and turnips with Ramborn Cider. Unfortunately, two ciders that were selected for this evening didn’t pair well in my opinion. I think that the Old Man and the Bee from Little Pomona was much better without food than with food. Also, Edu by Angry Orchard tasted better on its own than paired with fried artichoke and gourmet mushroom ravioli.

The idea of pairing cider with food is not new. But if you invite two two-Michelin-starred chefs such as Léa Linster and Andreas Krolik to create dishes with ciders and to pair dishes with ciders, it is much more than just fine cuisine. Let me explain to you briefly why. 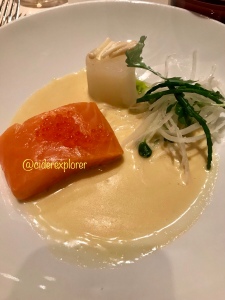 I assume that most guests booked a ticket for cider dinner because of the duo of two-Michelin-starred chefs Léa Linster and Andreas Krolik. But what the guest got in return was not only sensational food but also an introduction course to cider. Based on my observations, most guests had rather limited knowledge of cider before the dinner so each cider style that was served was new to most. I heard oohs and aahs on ice cider from Brännland but I noticed that some guests sitting at my table refused to drink the Old Man and the Bee from Little Pomona, the English “West Country” cider, which may not be suitable for everyone. But as Gabe Cook pointed out when I brought this up, all the guests learned that cider may have many faces and may come in different flavours. It is difficult to disagree with that.

Another advantage of such an event is getting awareness of chefs that food can also be paired with cider and can amplify the pleasure associated with eating. This is of extreme importance as chefs are also influencers and can hugely impact restaurant guests and so introduce them to quality cider, which hopefully will lead to a cider chain reaction. Not only guests could be converted to cider but also sommeliers, who are in charge of food pairings. Thank you, Ramborn for letting me participate in this sensational cider dinner and promoting cider in such an outstanding way!

Michael Stöckl must have some kind of magic powers as the day when CiderWorld actually begins for visitors, is always warm, sunny and simply beautiful. This time, ninety cider makers from twenty countries gathered and poured cider/Apfelwein/sidra/sagardoa/sidro or siider to thousands of visitors. Similarly to last year, visitors came to Gesellschaftspalmengarten to sample cider from around the world. At some point, there were so many visitors that it was a challenge to move from one cider booth to another. From what I heard, some came to CiderWorld, not because of cider but because they heard of CiderWorld and wanted to check this event out. And, in the end, they were surprised that cider can taste so good! When you hear opinions like these you know that events like these are important and meaningful!

As I mentioned earlier, the quality of ciders this year was exceptionally high. I’ve sampled so many great cidres that I had difficulties shortlisting them. Obviously, also this time I failed to try everything. So I might have missed a few cider discoveries for which I apologise. You might actually say that ciders below picked up Cider Explorer’s Gold.

CiderWorld in Frankfurt is one of those events that you look forward to every year and once it belongs to the past, you can’t believe it’s over. Especially, if you are a cider lover or a fan of quality cider. Not only I tried many new ciders from cider makers sometimes  I haven’t even heard of but I also met with many old friends and made new friends. In addition, it was great to finally meet in person with cider makers, whom I only exchanged emails with for the last year. CiderWorld is a true cider celebration of cider as a beverage and of the cider community, which turns out to be fantastic and very supporting people. Already planning my trip for CiderWold2020! Cheers!

One thought on “CiderWorld2019: visit recap”