B. Nektar is a cidery, meadery and brewery based in Ferndale, Michigan, U.S.A consisting of Brad, Kerri and their friend Paul – three passionate home brewers. An idea to make a living out of creating beers, meads and ciders began to grow after Brad and Kerri’s wedding when the guests gave very positive reviews about their homemade mead.  When Kerri lost her job in 2006, the trio decided to turn brewing into a full-time business. Today B. Nektar is one of the largest meaders in the U.S. and their products are distributed also in several European cities like Berlin.

Aroma/Nose: the nose is moderately strong with notes of caramel, coca-cola, tea and hints of cinnamon, cloves, vanilla and cardamom.

Taste: my first taste is medium sweet, light watery with the low sourness of a lemon. Further notes are of tea, lemon, vanilla, cloves with low astringent taste. It gently numbs the tongue – due to eugenol present in cloves. The finish is lightly citrusy with chai spices and a hint of astringency.

Overall: Jenia from the Muted Horn told me that The Dude’s Rug tastes like Christmas according to her. I would rather compare The Dude’s Rug’s to coca-cola yet made from natural ingredients, with a much deeper taste and better length. Despite many delicious notes of spices, I thought it was refreshing and tasted pleasant on this hot day in Berlin. But to my palate, it was too sweet. The longer I drank it, the less I wanted to take another sip. So this is definitely a thing for those who prefer their cider on the sweeter side. Sadly, I couldn’t pick up any apple notes. Summarizing, an interesting and nicely balanced…Christmas cider or natural coke. 4/6

Availability: B.Nektar ciders seem to be widely available in many European craft beer bars. In Belgium from Bieres Gourmet.

Last weekend I was wandering around Berlin looking for bars and shops stocking real cider. Most bars offered the usual commercially available ciders from Aspall or Strongbow, which I refuse to drink. But then, in Neukölln, an upcoming multicultural district of Berlin, I discovered a craft beer bar called Muted Horn and made there a very interesting observation. I was standing at the bar and looking at the list of ciders available in bottles when I discovered that apart from Welsh cider, Gwynt y Ddraig they stock cider from the US company Starcut Ciders, which is based in Northern Michigan.  I was very much surprised as the distance between Berlin and Michigan is around 7000 km.

I spoke to the bartender in the Muted Horn and asked him if they offer cider on draught sometimes. I learned that in the past they had another cider from Michigan, the Death Unicorn from B. Nektar Meadery, and also one Canadian cider on draught from Cidrerie Milton, which is located in Sainte-Cécile-de-Milton, Quebec. Wow, another cider from overseas I thought. The distance between Quebec and Berlin is approx. 5.500 km.

It didn’t stop there. Since I was already in the area of Neukölln, I’ve decided to check out a craft beer store, Lager Lager, which was just a 15-minute walk away from Muted Horn. After having a pleasant chat with the sales guy in Lager Lager, I’ve learned that they would love to stock UK cider, but the import of cider from the UK is just too costly. However, this week they are expecting an overseas container from New Zealand loaded with imported goods, including cider from Zeffer Cider Company. I calculated the distance between Berlin and New Zeland and it is roughly 18.200km! This gave me food for thought… 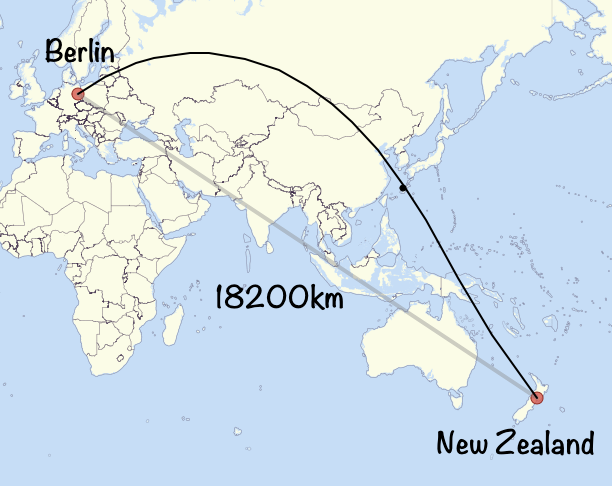 I gave my observation some thought and I see a number of possible explanations for it. Firstly, the vast majority of cider makers operate locally focusing on farmers markets, local cider/beer festivals or supply of local restaurants or pubs. Only occasionally selling products to the US, but ignoring the rest of Europe. Depending on how you look at this matter, you may call it a focus on the regional market or a misfunctioning/limited sales strategy. Secondly, it might be a real-life example of the global village, where you can buy products manufactured 20.000km away without spending 20 hours on a plane. Thirdly,  the overseas cider has just reached the status that wines from Napa Valley once had to fight for. The first explanation is probably the closest to the truth.

Personally, I don’t mind having a glass of hard cider from the US or Canada as long as it’s not from concentrate. Seriously, I’m happy to try a cider from New Zealand without even having to leave Berlin. Lucky me! But, I want to have a choice between cider made in Europe and overseas. Unfortunately, I don’t have the privilege of choosing because, at this moment, the only real cider on draught available in Berlin is from the US and Canada. Perhaps it’s time to rethink the marketing and distribution strategy? I know, a good marketing and distribution strategy cost a substantial amount of money. But look at the Zeffer Cider Company from New Zealand. They needed funding to expand into Asia and raised $1.2 million in a crowdfunding campaign in under a week! See the article here. Learn from them because now they are taking Berlin. How about you? When will you take Berlin?

UPDATE: Just learned that most European cider makers don’t even offer their cider in kegs, not to mention recyclable one-way kegs.

Dear cider makers, please be more flexible and widen your keg offer! Cider drinkers in Berlin want to drink decent cider as well! Don’t leave us with Strongbow being the only cider available on tap :-/